Max P. Twinkle is a television clown trapped in an existential quandary with a bitter llama and a loveless bunny rabbit. There will be jokes, and love, and death, and entrances and exits. CLOWNTIME IS OVER  was first performed at the Overtime Theater in San Antonio, Texas, from January 10 to February 8, 2014. The production was directed by Edward Wise II and starred Chris Kelly, Brennan Loy, Kylah McCoy, and Justin Bankston.

SAN ANTONIO EXPRESS NEWS: "In a brisk hour of interplay and hopscotch, with Max waxing through various emotional states as the animals try to find common ground, this...smoothly touches on themes and forms that are familiar mainly because they're eternal."

Clowntime is Over on Vimeo courtesy of Mise Media

CLOWNTIME IS OVER  was next produced by MadLab in Columbus, Ohio, from August 20 to September 5, 2015. The production was directed by Andy Batt. The MadLab production received five Theatre Roundtable Award nominations, including Outstanding Production, as well as Best Actor and Best Supporting Actor. It won one, for Makeup Design. The story was written up in the Columbus Dispatch.

LIFE FULL OF CHEESE: "Clowntime is Over defies classification in a way; it’s as challenging as you want it to be. It’s a very dark comedy one minute, a heartbreaking drama the next, and then it all appears to be some sort of existentialist exercise...I laughed out loud, cringed a bit, and thought a lot; what more can I ask for from theatre?"

COLUMBUS UNDERGROUND: "Andy Batt has to carry this, on stage for every moment of its run-time, and he’s a revelation – he takes everything the audience knows about sad clowns and alternately leans into and away from that. His is a staggering portrait of a man who finds “the smallest are the most favored” starts to seem like a lie eventually and that your soul can’t always be fed on the laughter of others. Not only that, but this portrait is painted with clockwork-perfect physical comedy. It’s a tour de force I’ll be thinking about for a while."

SCREEN OF DISTANCE: "Slapstick and one-liners and pathos on a twisted mobius strip of daily routine, this was my favorite piece MadLab staged all year and the “guest appearance” of Stephen Woosley’s Paco the Mouse might have been the hardest I laughed."

CLOWNTIME IS OVER received a third production, this time via Memorial High School in San Antonio, Texas. This production was directed by Liz Vermeulen and was performed with some tweaks (to soften some of the adult language and references) in March 2016.

Cristabel Cuellar visits a lonely town in the Pacific Northwest ostensibly to investigate an auto accident, but is in fact looking for signs of the Hollow Earth. Her claimant, Judith, has been having nightmares of a devilish figure who takes her on a tour of the Underworld. Together they go on a journey that will change their lives forever. THE VAPOURS covers esoteric territory in the context of a thriller in which digging too deeply may uncover literal monsters.

This edition also contains two bonus one-acts, A BUNCH OF LIES and THE NOBODIES.

THE VAPOURS  was first performed at the Overtime Theater in San Antonio, Texas, from May 13 to June 11, 2016. The production was directed by Edward Wise II and featured Liz Vermuelen, Gina Hughes, Venny Mortimer, Chris Kelly, & Nicholas Lemos.

SAN ANTONIO EXPRESS-NEWS: "It's a compelling show that allows the audience to work out the central mysteries for themselves, leaving them plenty to chew over."

Phil, a science fiction writer, has just received first contact from an advanced alien species who wish to offer him a very special job in the future to come...or he's schizophrenic, and the scenes playing in front of his eyes are just fragments of unwritten stories, flashbacks to favorite memories, or a mix that only make sense in the final scene.

There's no way to tell...or is there? Truth to tell, Phil's been doing a lot of drugs lately. This edition comes with a bonus one-act, FAIR IS FOUL. 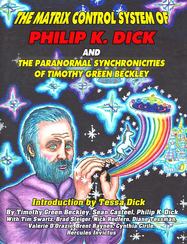 I am honored to be included in a 2017 anthology by Tim Beckley of the Exploring the Bizarre radio program concerning the science-fiction author Philip K. Dick and the paranormal. With an introduction written by Tessa Dick (whose own radio show I've previously been a guest on), the book covers all sorts of fiction, non-fiction, and material inspired by his work. If you're not familiar with Philip K. Dick, his ideas have been adapted for the films Blade Runner, Total Recall, Minority Report, Paycheck, A Scanner Darkly, Radio Free Albemuth, and the Amazon series The Man in the High Castle.

My own play The Dull are the Damned  is cited in this extremely interesting collection. My play is loosely based on some elements from Dick's life, and the central character is called Phil. I have also written about Blade Runner in my first book, Dissenting Views.

EINSTEIN'S WRONG ABOUT EVERYTHING

This play is based on true events, possibly true events, and blatantly untrue events. The year is 1956, and Princeton autopsist Thomas Harvey just decided to steal Einstein's brain. That decision now has him on the lam from both the authorities and a group of neo-Nazis led by a woman who may or may not be related to the Elephant Man. And now he just found out his new roommate is the heroin-addicted Beat writer William S. Burroughs. What will he do next? Will it make sense? Will it involve getting help from some of the most famous figures of the 20th century?

This play strikes at the very heart of these questions and more. EINSTEIN'S WRONG ABOUT EVERYTHING may make you laugh, make you cry, make you reconsider every thought you've ever had since reaching the age of reason. Or not. Let's not get crazy with our expectations.

In addition to these, my short play THE OFFICE OF SUPERVILLAIN RECRUITING was performed at the Woodlawn Theatre as part of TheatreASAP on September 21, 2012.